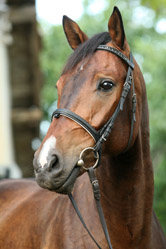 Armageddon was born on 01.01.2010 at 7 am and gave us a hope for a better year. His mother was very milky Galleria and for the first birth handle great. She is the daughter of Albena, one of the best mothers of former stud farm in Balchik, and for several years and Kabiuk! Its brothers by mother at the club are Vassal  and deceased Darko! Armagedon has grown with the physics of bodybuilder influenced by its structure with a deep chest and a very powerful tail. Outlines to be low on a horse, but the jump is a blast! In the sports world there are many horses that are under 160 cm and height! His father belonged to Apocalypse lines ALME Z and RAMIRO, which have thousands of great successors of the class of world sport! Of them is an excellent exterior - perfect structure and beautiful neck! Under the saddle is very concentrated, and cord captivates with discipline and desire to move forward. Hock joints describe his huge circles front is lightweight and trot him on the clock. Slightly describes his long neck very beautiful curve that is comparable only with horse dressage. His feet are dry, crisp tendons, hooves are impeccable, and his back was raised and rides very soft! Too calm his character conceals his temperament. In the canter he has power of his grandfather and Pure power and flexibility of charming his father. It is so flexible that it can be compared to a bouncing rubber ball! We believe that The reduction of his stature would be an obstacle in the sport, his first training he jumps with ease! Suitable for dressage and eventing.